Every once in a while I get a good photo that is not increased by painting it. This I think, is one of them.

Every year Jack and his wife Jill, have a new crew to raise, this year and last, they had 3. They work very, very hard from nesting to feed those fast growing babes – babes that quickly get to be the same size as they are.

Jack has immense pride in his offspring, showing them love and adoration, faithfully feeding and fathering his young.

There comes the time when they encourage and train the young ravens, first in flight, in awareness, in feed and survival. Occasionally jumping out from the middle of the weaning children, he leads them into independence.

Please enjoy with me this moment I caught this morning.

It is also wonderful to note that Daddy and Mama are aware of their roles in life, and their faithfulness to each other and their young. 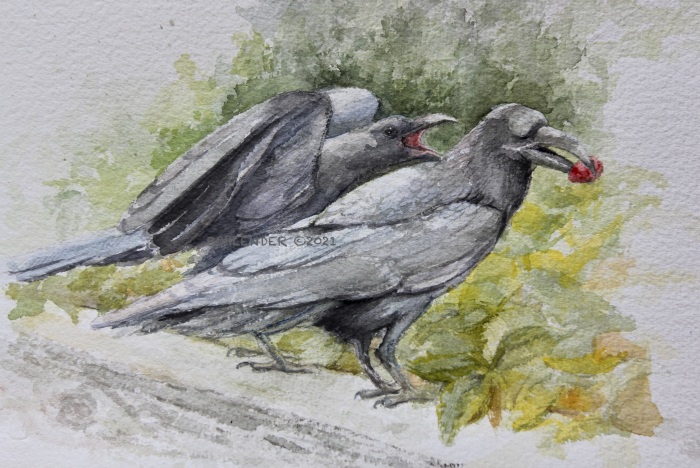 We have a raven family, Jack and Jill are the parents. Each year they raise young, usually two – although last year they had three. They raise them, they teach them, they feed them even if they are a little bigger than themselves before they are able to feed themselves.

The quality of their family life is delightful. They sit close together, they nuzzle each others neck feathers, they have a system of feeding. They watch for other birds that want their goodies, or could hurt their babies.

The raven family sticks together, until death do us part.

Once several years back we had another raven family, whom I named Dipper and Squawker. Dipper hurt his wing and could not fly yet. I saw him and his mate together on the ground, he working his wings, she beside him. I am hoping he got well, because after awhile I didn’t see them any more.

This year’s babies have just “flown the nest”. I think it’s grasshopper time over the hill, a suitable time for new ones to make their own way.

I love watching them, they love our strawberries and occasionally an apple, but for the most part they are pretty self sufficient. What a gift to watch.

When the mountains are snow-peaked in the early spring and the yellow bladderpods bloom, this spot on a hilltop reminds me of the high-meadow in the Alps where, in the film,  the family was escaping Austria. I can hear Julie Andrews singing when I am approaching the place from below. After the mountain snowmelt, the yellow wildflowers remain for a time, then fade away.

Sometimes I give Jack a snack, and he is encouraged by that small kindness to, on occasion, anticipate my pathway as I walk. He fluffs his feathers, croaking sweet love sounds. He perches in familiar spots, this weathered mesquite stump being a favored perch. Jack is a smart bird, willingly giving us space enough to make sure we are not overly frightened by his closeness. Yet he allows enough nearness when he poses and flexes his muscles for his next photoshoot, but most of the time he taps his large bill on his perch as an indication that he really is ready to get his treat.

Jack has a noble heart, loyal to his mate, “Honker”, and perfectly raven in all of his ways. We are a member of Jack’s murder, we love that he shares his territory with us.